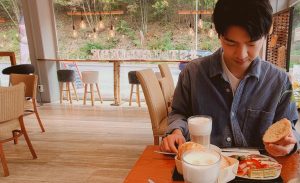 (Nov 2022) Moved to Germany to start my TT position at Saarland University!

(June 2021) Our ISLS paper was nominated for Best Design Paper!

Kajitory is a student-facing learning dashboard for an online college-level statistics course designed to support students’ understanding of their learning progress data in a “contextualized” way. Rather than using competency-based indicators, such as names of skills and learning objectives, Kajitory uses concept-based indicators, including course topic names, to communicate learning progress with students. The dashboard has shown positive preliminary data, which implies an important difference between how educators think students understand their learning and how students actually try to understand their own learning.

Whom I worked with:

Through a series of unstructured interviews with online learners, we found that many students have a hard time making sense of the given information on a learning dashboard, which is typically communicated in a form of competency-based indicators (skills and learning objectives). We addressed this issue through a lens of a categorization theory in cognitive science known as Basic Level Categories (Rosch, et al., 1976), hypothesizing that the students’ struggle comes from the mismatch between the levels at which how existing learning dashboards report student learning and how students actually try to make sense of their learning.

With the aim of creating a dashboard that communicates with students in a way that makes sense, we designed and iteratively improved several prototypes, each showing student’s learning progress using different forms of the indicator.

My role included both research and design, from need-finding and prototyping to user-testing and analyzing data.